The Top 20 Works of Speculative Fiction from the 20th Century

A novel's value is too subjective to universally quantify. Superlatives are useless; rankings, mere expressions of an individual's tastes. This list is no different.  A more appropriate title for this list might be "20 Gateway Novels into the World of Speculative Fiction." For each of these novels are remarkable representations of the literary category's accomplishments and potential. If there is any methodology in quantifying the value of these works it's in their commercial impact. Indeed, there were a number of significant works of speculative fiction written in the 20th century that were intentionally removed, because while those works are stylistically important, their cultural impact across a broader audience unfamiliar with the literary category remains minimal (see: Harlan Ellison).


Aficionados of speculative fiction may wonder why I wouldn't direct readers directly to the archives of the Nebula or Hugo Awards. To that, I say that is the equivalent of suggesting that the only news worth reading is that which has won a Pulitzer Prize. Ultimately, any list trying to standardize a canon of "must read fiction" only echoes the same cultural outcome that occurs in our collective listing of "must buy groceries." For those who are believers in an apple's sweet taste, apples continually make the list. Everyone else, have fun eating shitty plums.

Affiliate Disclosure: purchases made through the following "buy from" links offers me the opportunity to make commission off those sales, and to keep my site ad-free.

Enjoy, happy reading, and let me know which of these books you enjoy most!

We by Yevgeny Zamyatin

The novel that inspired Orwell's 1984, and is often cited as the work responsible for popularizing the "dystopian" genre of literature.

“A man is like a novel: until the very last page you don't know how it will end. Otherwise it wouldn't even be worth reading.”

“But I don’t want comfort. I want God, I want poetry, I want real danger, I want freedom, I want goodness. I want sin.”

“A really efficient totalitarian state would be one in which the all-powerful executive of political bosses and their army of managers control a population of slaves who do not have to be coerced, because they love their servitude.”

The reason the adjective "orwellian" entered our vocabulary.

“Perhaps one did not want to be loved so much as to be understood.”

The Lion, The Witch & the Wardrobe by C.S. Lewis

Lewis was told to not write the Narnia novels, and at first its reception was silent. Published at a time when Children's works were meant to reflect seriousness and reality, Lewis' world of Narnia has since enchanted hundreds of millions.

“I wrote this story for you, but when I began it I had not realized that girls grow quicker than books. As a result you are already too old for fairy tales, and by the time it is printed and bound you will be older still. But some day you will be old enough to start reading fairy tales again. You can then take it down from some upper shelf, dust it, and tell me what you think of it. I shall probably be too deaf to hear, and too old to understand a word you say, but I shall still be your affectionate Godfather, C. S. Lewis.”

I, Robot by Isaac Asimov

Before Chuck Palahniuk penned the infamous rules to Fight Club (shhhh), Asimov wrote the eery trio of robotic laws. The thing about laws though, is that they will be broken.

2: A robot must obey the orders given it by human beings except where such orders would conflict with the First Law;

3: A robot must protect its own existence as long as such protection does not conflict with the First or Second Law;

The Zeroth Law: A robot may not harm humanity, or, by inaction, allow humanity to come to harm.”

A book about book burning, which has, at one time or another, ironically been banned in Texas, Florida, and California.

“‘Cram them full of noncombustible data, chock them so damned full of ‘facts’ they feel stuffed, but absolutely ‘brilliant’ with information. Then they’ll feel they’re thinking, they’ll get a sense of motion without moving. And they’ll be happy, because facts of that sort don’t change. Don’t give them any slippery stuff like philosophy or sociology to tie things up with. That way lies melancholy.'”

“‘A book is a loaded gun in the house next door. Burn it. Take the shot from the weapon.'”

The Fellowship of the Ring by J.R.R Tolkien

During WWI J.R.R Tolkien encountered warfare where "junior officers were being killed off, a dozen a minute." The haunting memories of his time in the trenches much inspired the creation of middle-earth, and its foes in Mordor. In this, J.R.R. Tolkien embodies an absolute artist; as one who discovers meaning in beauty through experiences otherwise horrific.

“It's a dangerous business, Frodo, going out your door. You step onto the road, and if you don't keep your feet, there's no knowing where you might be swept off to.”

“Moonlight drowns out all but the brightest stars.”

Starship Troopers by Robert A. Heinlein

Original reviews criticized the classist representation of a society which offered more rights to military members than those who hadn't served. If only reviewers could have seen that the future military experiences in the U.S. would have rivaled some of the militarism ideals.

“There are no dangerous weapons; there are only dangerous men.”

“Liberty is never unalienable; it must be redeemed regularly with the blood of patriots or it always vanishes. Of all the so-called natural human rights that have ever been invented, liberty is least likely to be cheap and is never free of cost.”

Man in the High Castle by Philip K. Dick

The Axis powers win WWII, what then? That's premise of this mind-bending alternative history, and Amazon's 2015 TV adaptation. A remarkable journey into a world that could-be, but isn't.

“Perhaps if you know you are insane then you are not insane. Or you are becoming sane, finally. Waking up.”

“There is evil! It's actual, like cement...I can't believe it. I can't stand it...Evil is not a view ... it's an ingredient in us. In the world. Poured over us, filtering into our bodies, minds, hearts, into the pavement itself.”

A Clockwork Orange by Anthony Burgess

An engrossing, gripping tale of violence. Fitting, since Burgess himself claims he wrote the entire work in three weeks in a jeu d'esprit. The film, unfortunately, he cites as leading to his novel becoming forever misunderstood. A misunderstanding he so deeply regrets that he wished he never wrote A Clockwork Orange.

“Is it better for a man to have chosen evil than to have good imposed upon him?”

“We can destroy what we have written, but we cannot unwrite it.”

The comic that would eventually demarcate the entire entertainment industry after the release of Iron Man in 2008. Humble beginnings for what has now become a billion dollar IP. Not unlike the life of Tony Stark.

"Now I'd better get back to the factory before everyone realizes how well they can all get along without me!"

"What cruel trick of fate is this?? I'm one of the strongest, most powerful, most feared humans on the face of the Earth! There is nothing I cannot accomplish... Nothing I would not dare! And yet, I haven't the courage to remove my iron armor... I don't dare gamble with my damaged heart! I'm a prisoner of Iron Man... Of my own creation!!"

The book has floated for decades as a kind of gateway book into the depths of science-fiction, and is attributed for popularizing the genre of Climate Fiction.

“The mystery of life isn't a problem to solve, but a reality to experience.”

Do Androids Dream of Electric Sheep?  by Philip K. Dick

“You will be required to do wrong no matter where you go. It is the basic condition of life, to be required to violate your own identity. At some time, every creature which lives must do so. It is the ultimate shadow, the defeat of creation; this is the curse at work, the curse that feeds on all life. Everywhere in the universe.”

A moving, comical anti-war novel written in a style unmatched.

“How nice -- to feel nothing, and still get full credit for being alive.”

“Like so many Americans, she was trying to construct a life that made sense from things she found in gift shops.”

The Left Hand of Darkness by Ursula K. Le Guin

The novel that popularized Feminist Science Fiction and challeged sexual norms nearly half a century before common society legitimized forms beyond the binary male and female.

“To learn which questions are unanswerable, and not to answer them: this skill is most needful in times of stress and darkness.”

“A profound love between two people involves, after all, the power and chance of doing profound hurt.”

The Shining by Stephen King

A warning to all who stay in haunted hotels.

“Wendy? Darling? Light, of my life. I'm not gonna hurt ya. I'm just going to bash your brains in.”

“We sometimes need to create unreal monsters and bogies to stand in for all the things we fear in our real lives.”

The book attributed to creating, and popularizing, the word "cyberspace."

"Cyberspace. A consensual hallucination experienced daily by billions of legitimate operators, in every nation, by children being taught mathematical concepts... A graphic representation of data abstracted from banks of every computer in the human system."

The Handmaid's Tale by Margaret Atwood

“Don't let the bastards grind you down.”

“Better never means better for everyone... It always means worse, for some.”

Harry Potter and the Sorcerer's Stone by J.K. Rowling

The book that began the best selling book series in history.

"It does not do well to dwell on dreams and forget to live."

Subscribe today to read all Speculatively writings. It's free (& DEATH IS NEAR)! 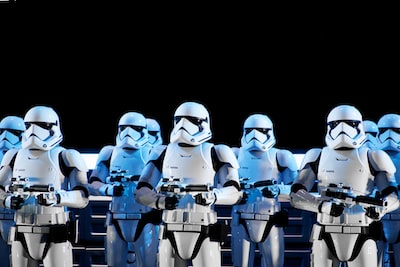 
The Best Science Fiction is actually Speculative Fiction, But What Makes a Book 'Speculative'?


A Fake Raid, Fake Village, and a Real Sinking AAV